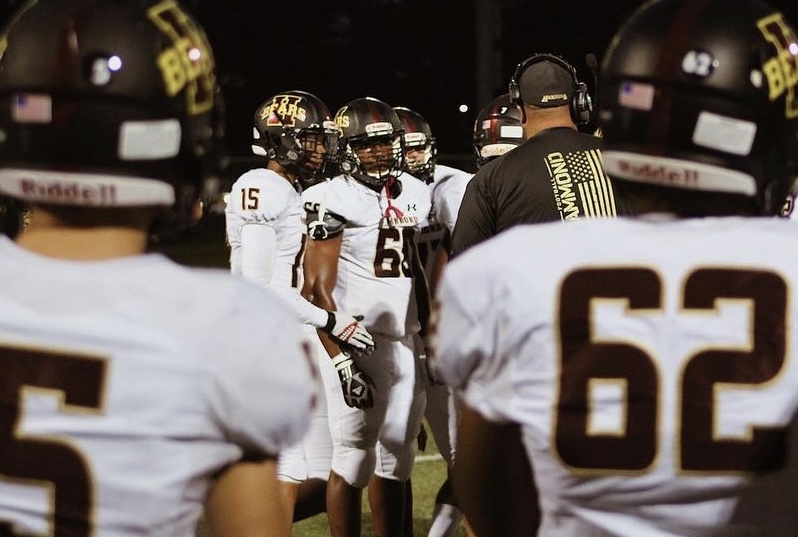 Although the record may show a different story the Hammond Golden Bears had success in many other areas this past season. Jamari Davis and Khaliq Parks had major roles this year on the team. Davis played wide receiver last year but had to step up and take on the role of starting quarterback. Parks was the leading rusher and scorer on the team with the run game being a massive component in the offensive game plan.

Coach Bell had this to say when asked about some positives coming out of the season “We had a lot of new kids come out that were new to football. It was great to see them experience a season and get something out of themselves where normally they would be watching or just not participating at all.”

“Our kids from start to finish each game each week worked extremely hard and never showed any signs of giving up and worked as hard as they could all year.” said Coach Bell, who was impressed with the effort and work that the players put into this season. “And that’s something that a lot of teams and other coaches in the county spoke very highly of, as they’ve seen a lot of teams that they played give up throughout games or stop playing hard; and our team never would. That’s a testament to how they are as people, really hard working kids.”

The Golden Bears finished with a 0-10 record on the season, and when asked if he would change anything Coach Bell said “I don’t think I would change anything. Our kids worked extremely hard, extremely well, week by week. We were teaching the game of football and it’s difficult to play catchup at the varsity level against teams that are more experienced. And with us having 14 kids that were brand new to the sport  it was a learning process each week and where we started to where we finished was tremendous. Our kids grew a lot throughout the year and our wins did not come through the record, it came in other areas. Which our kids saw weekly and they were pretty proud of.”

“We need to hit the weight room. We need to get a lot bigger and a lot faster and stronger. We were the smallest school in the county so naturally we’re going to have the least amount of kids and the kids that we do have we need to be bigger. We have to be stronger and faster than our opponents.” said Coach Bell when asked about his goals for the offseason.“Winning starts in that room and that’s what we need to attack this offseason hard.”

“To be more competitive in terms of scoring more points and not allowing as many points” said Coach Bell when asked about next season’s goals. He also added “win the offseason, hit the weight room hard, get a lot bigger and have that player development from one year to the next which we’ve lost a lot of over the years.”

With this season having concluded, Hammond is looking up for next season with a young team, passionate coach ,and killer work ethic. The goals are to get stronger, faster, and prioritize the weight room. “The winning starts in that room” Coach Bell concluded.